The gates on your fence have a special visual and psychological meaning. They are the entrance portal to your realm. They are meant to be opened with some ceremony. The gateposts on both sides of the gates themselves are taller than ordinary fence posts so that strangers can locate the access point. Tall gateposts lined by horizontal rail are iconic, symbolic of the threshold. There are often arches or small structures that give the gateway a certain gravitas, making people think about entering. 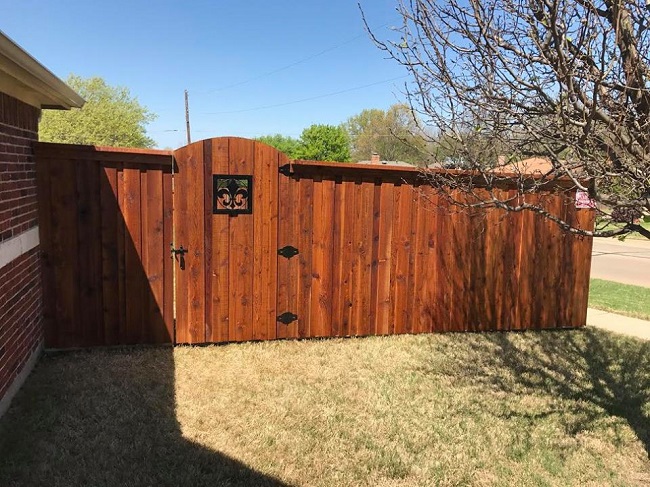 Fence gates have a special physics. In a way, stable gates are an impossibility because the laws of physics conspire against them. Gates will always tend to sag, and when they do they just don’t work right anymore. They pinch against the latch post. The gate misses the latch. The boards that once came together like gears in a well-made clock now seem to repulse each other.

A gate will sag if the gatepost shifts or the frame of the gate bends under its own weight. An angled cross brace can confer some stiffness. Without the cross brace, only the corner joints and the fasteners that hold the gate together hold the gate in shape. Over time, of course, tugs on the gate will loosen the nails and scrape the joints reducing the hold of friction. The square becomes a parallelogram.

Braces have to be put in the right place to hold the gate structure together. If the brace is installed in the wrong direction, a downward load on the end of the gate will eventually push the vertical frame on the hinge side of the gate sideways, warping the structure. There is always a lot of upward force on the post that has the hinges on it. The downward force on the end of the gate tends to turn it, pulling out the bottom hinge and lifting the fence post itself out of its hole. Loading a gate is like pushing down on a sheet of paper held on its edge.

The principles of gate rigidity and the forces and tensions on the gate and the gateposts are true of all materials, even though many materials have better rigidity, inherent strength and less mass than wood.

If the gate is made of wood, you have to cope with the shrinking and expanding qualities of wood. Wood tends to shrink against the grain. Shrinkage and expansion of boards can cause nails and screws to pop out of their holes, or boards to split when the fasteners don’t give. The gate is likely to twist from true along its face.

Gateposts that hold the hinges have to be strong and well-anchored. There is a lot more downward force on them than the ordinary line fence posts. The anchorage of the gate posts in the earth must be deep enough to prevent the continuously lifted and falling posts from popping out of the ground. In anchoring the gateposts, you have to consider the condition of the soil and the degree that moisture and ice conditions change the soil line.

The gate is the only moving part in the fence. As such, it is subject to repeated and constant change that causes stresses, swinging on the gate, slamming the gate. Since fences have to be contiguous, with no breaks, the stresses from the turning forces will translate down the entire fence line, creating pressures that threaten the structure all along the fence.

To increase the lifetime of your gate,

Woodcrafters Fencing is family owned and operated and has been building quality fences in the Ellis Texas area for over 25 years. Please contact us to learn more.

There is nothing quite like enjoying a baseball game in a stadium on a hot summer day. You can feel a gentle breeze in your hair, and the smell of hot dogs fills the air. You drink a beer and eat a brat with the sun on your face as you take in America’s pastime…

Your home and property should be your haven and a place where you feel safe and secure. A great way to make this happen is to build a protective fence around your property. You can then finish of this fence by installing a gate that has access control. This type of gate controls who can…

Although it may seem like a straightforward task, selecting the right fence for your home can be a bit more complicated than you might think. There are a variety of factors to consider, including the style of your home, the climate in your area, and your budget. To make sure you’re getting the best fence…

Choosing Between A Patio and a Deck Patios and decks are among the two biggest additions people choose to install on their property. They are great for gathering places and enjoy the great outdoors, whether you are cooking a bbq or are simply reading a book. There are an infinite number of designs for each…

Do have small children? Do you have big dogs? What about friends in the neighborhood? If you said ‘yes’ to any of those, and even if you didn’t, then a backyard patio deck may be the perfect choice for you. Patio decks are a great addition to any home, especially if you love being outdoors…